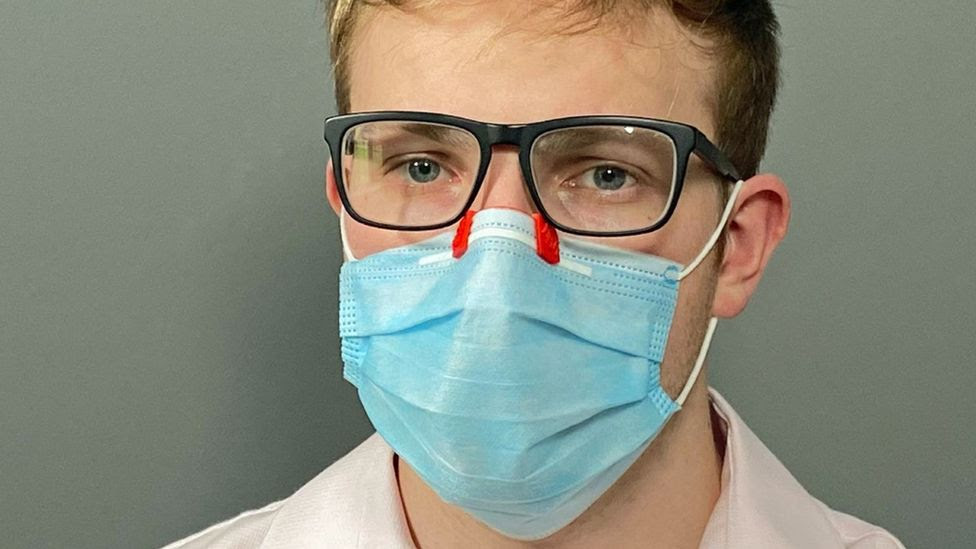 The pandemic has hit young people’s work and career prospects particularly hard. For Alex Wickens, 22, the best response was to start a business designed to tackle a practical problem that has emerged in the era of Covid.

It is something many of us will have experienced for the first time, thanks to the pandemic.

You put your face mask on to enter a shop and your glasses start fogging up. All of a sudden you can’t see the products on the shelf and you’re losing your bearings.

Alex, from Sussex, noticed this problem working shifts at his local supermarket. He would struggle to read the package labels sometimes, when he was stacking shelves.

He hadn’t planned to be working in a supermarket, but the pandemic had thrown all his career plans into the air, just when he thought he had his life sorted.

He had taken a year off after sixth-form college to figure out exactly what he wanted to do with his life – and realised he wanted to be a commercial pilot.

After a great deal of preparation and effort, he managed to gain a place at a flight training school.

But by spring last year it was clear that the pandemic was here to stay for a while. The aviation sector was very badly affected and all of a sudden it didn’t seem a sensible career option. Alex was not willing to risk the huge fees involved, which he would have to borrow.

So he took a job at his local supermarket to weather out the pandemic, however long it might last. This brought him enough money to live on, since he lived with his parents.

It was at the supermarket he encountered his foggy glasses problem – and he noticed that lots of other customers, who were trying to combine face masks with spectacles, were having the same issue.

Covid had created a new problem and if there was a solution, there was a possible business opportunity, he thought.

Searching online for a practical remedy he found that all it would take to fix the steamy glasses issue is a simple clip placed at the top of a mask.

This secures the top of the seam around the bridge of your nose, ensuring your breath exits away from your glasses. Several small companies make these. He found a firm in Normandy, France that made them to order, using banks of 3D-printers.

Normandy Ecospace makes the clips using by-products from the food industry, like corn starch, coffee grounds or finely ground mussel shells, rather than plastic, making them better for the environment.

He got in touch and organised to distribute their clips in the UK.

When not working at the supermarket – his new job became building a website for his MistyClip brand, creating a payments system and organising stock control and shipping.

As lockdowns continued, there has been steady demand for his product. His business took over parts of his parents’ house and indeed, he had to enlist their help on occasions.

In his best month he took in nearly £3,000 in revenue – in most he takes around £1,000. He donates 10% of profits to a local charity called Trelis that supports homeless and unemployed people.

He’s had positive feedback from a variety of customers, from people working on construction sites to fellow key workers in the NHS and supermarkets.

Alex hopes he can still sell his clips to those who still choose to wear face masks as lockdowns ease, as well as professionals like doctors and food hygienists.

He still wants to be a pilot, but thinks in the meantime, the business is helping him emotionally as well as (a little) financially.

“When I had to put my dream job on hold – starting a business helped me fill the void, it gives me purpose,” says Alex.

“I feel like I’m doing something worthwhile and without it, to be honest, I would have been lost.

“But I’m waiting for the pandemic to pass, so I can chase my dream.”