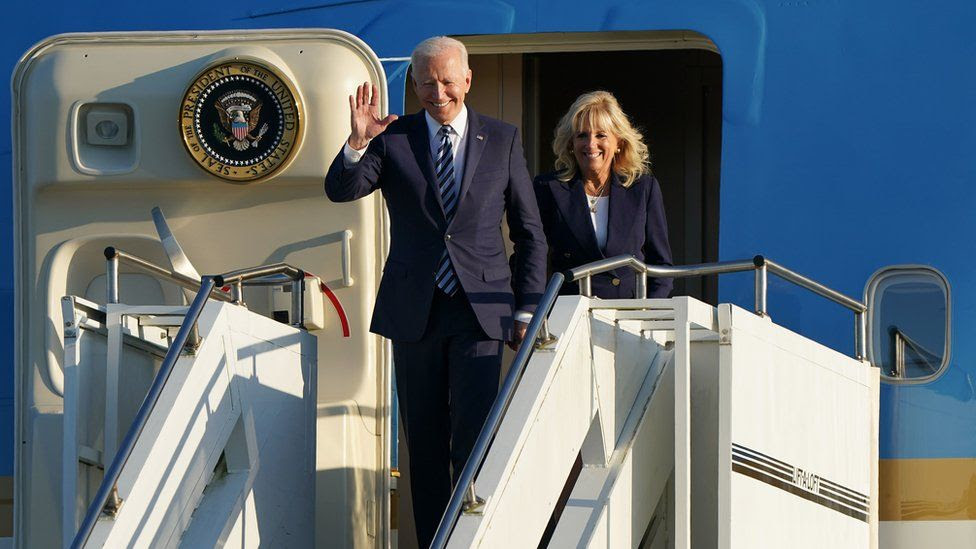 US President Joe Biden’s administration will provide 500 million doses of the Pfizer Covid-19 vaccine to about 100 countries over the next two years, US media report.

About 200 million doses will be distributed this year with the remainder delivered in 2022.

The US has been under pressure to do more to increase vaccination in poor countries.

The move comes as Mr Biden embarks on his first foreign trip as US president.

The White House is yet to officially comment on the plan to roll out 500 million doses worldwide.

But when asked if the US government had a vaccination strategy for the world, Mr Biden said: “I have one, and I’ll be announcing it,” before boarding Air Force One.

An eager crowd awaited his arrival on Wednesday at the RAF Mildenhall air base in Suffolk, keen to catch a glimpse of Air Force One when Mr Biden touched down on Wednesday evening.

The eight-day trip will begin with a meeting on Thursday with British Prime Minister Boris Johnson, before the two leaders set off for the G7 summit.

He will also meet the Queen at Windsor Castle and join his first Nato summit as president. He has said the trip is about “America rallying the world’s democracies”.

Meanwhile, a charter plane for the White House’s travelling press pool failed to take off from Washington after cicadas swarmed the plane’s engine.

Reporters were stranded overnight at Dulles International Airport and a new plane was flown in as a replacement.

What do we know about the 500 million jabs?

The US government will donate the vaccines to 92 lower-income countries and the African Union, Reuters news agency reports.

Distribution will go through the Covax scheme, which was set up last year to try to ensure fair access to vaccines among rich and poor nations.

People familiar with the deal told the New York Times that the US will pay for the doses at a “not-for-profit” price.

Albert Bourla, chief executive of Pfizer, is expected to appear with Mr Biden when he officially announces the initiative on Thursday.

What can we expect from the G7 summit?

It will be a major focus of Mr Biden’s visit.

The G7 (Group of Seven) is made up of the world’s seven largest so-called advanced economies – Canada, France, Germany, Italy, Japan, the UK and the US – plus the EU.

Their summit this year is being held in Cornwall, in southern England. Leaders will arrive on Friday, and meetings will get under way the following morning.

The main topic of conversation will be Covid recovery, including “a stronger global health system that can protect us all from future pandemics“.

Mr Biden is expected to warn that the ongoing UK-EU trade row could imperil peace in Northern Ireland. He will call on fellow leaders to protect the gains of the Good Friday agreement.

At the end of the summit, the UK – as the host nation – will publish a document outlining what has been agreed by the leaders.

When will Biden meet Putin?

The first US-Russia summit of the Biden presidency will take place in Geneva, Switzerland, on 16 June.

It comes at the tail end of Mr Biden’s trip, giving the president plenty of time to hear from US allies beforehand.

The White House has indicated that he intends to cover a “full range of pressing issues” with his Russian counterpart, including arms control, climate change, Russian military involvement in Ukraine, Russia’s cyber-hacking activities and the jailing of Russian dissident Alexei Navalny.

Mr Putin threw cold water on the meeting last week, saying he hoped to improve the “extremely low level of relations” between the two countries but expected no breakthroughs.

What else will Biden be doing?

Ahead of the G7 summit, the president is set to meet Mr Johnson. The White House said the meeting would “affirm the enduring strength” of the countries’ “special relationship”.

Both leaders took part in a virtual climate action summit hosted by the US in April but have not yet met in person.

The president and First Lady Jill Biden will also pay a visit to Queen Elizabeth II at Windsor Castle.

It will be the 95-year-old monarch’s first visit with a foreign leader since the death of her husband Prince Philip.

The next leg of Mr Biden’s trip takes place in Brussels, where he will meet with the leaders of other Nato countries.

US relations with Nato strained under his predecessor Donald Trump, but Nato secretary general Jens Stoltenberg – in a White House visit on Monday – hailed Mr Biden’s “powerful commitment” to US allies.