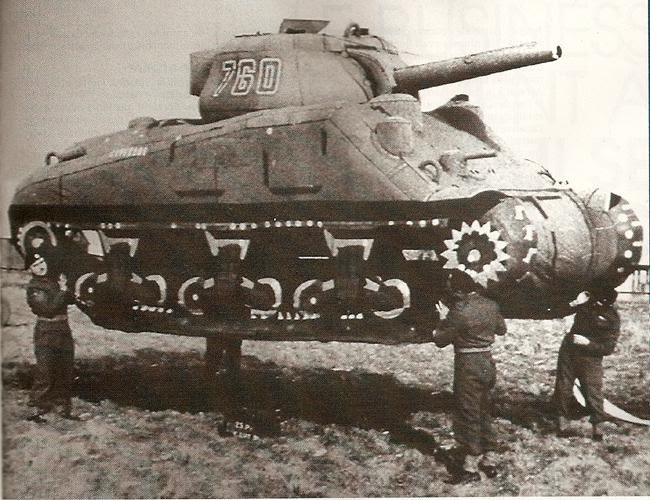 hen we think about artists working in wartime, we tend to imagine official war artists or the creators of propaganda. But what if artists, like the codebreakers of Bletchley Park, have been among the unsung heroes in the war effort – and crucial participants at the business end of conflict?

In the 20th Century, the epoch of “total war”, everyone had to play their part: men and women; professional soldiers and civilians; people from all walks of life. The role that artists, art historians, archaeologists and other arts professionals played in the century’s conflicts is yet to be fully told.

But the story of two military units from World War Two and their inspiration from artists working in World War One gives us a glimpse of how artists could become key players in warfare in the modern world. For the first time, they reframed the combat zone as an arena of creative strategy, making a literal “theatre” of war.

In peacetime, every artist’s training involves the creation of illusions: the ability to master and reproduce perspective and the way light and shade falls upon objects to trick the eye. Not all art aims at complete illusionism, but it is a recurrent theme in Western art history, from the tales of the ancient Greek painter Zeuxis (who could paint grapes so convincingly that birds tried to eat them) through to Op Art in the 1960s.

In time of war, artists traditionally had a minor part to play. But from World War One onwards, armies realised the benefit of artists’ knowledge of visual illusionism. In the new age of aerial surveillance, camouflaging troops was a critical necessity, and with their insights about light, shade and perspective, painters and sculptors had just the talents for the job. For the first time, artistic skills became weaponised.

One of the most important British artist-camouflages of World War One was Solomon J Solomon – a member of the Royal Academy who had studied under the famous French academic painter Alexandre Cabanel. In the Great War, Solomon eagerly joined the race for effective military concealment tactics and was posted to the Western front. His development of camouflage netting as a method of covering trenches became hugely influential, and he worked on many other deception schemes including an “observation tree” – a hollow replica tree trunk placed in no mans’ land, from which a forward observer could survey the enemy trenches. The sculptor and painter Leon Underwood – who had studied at the Royal College of Art before the war – helped in the design and (highly dangerous) assembly of these trees. 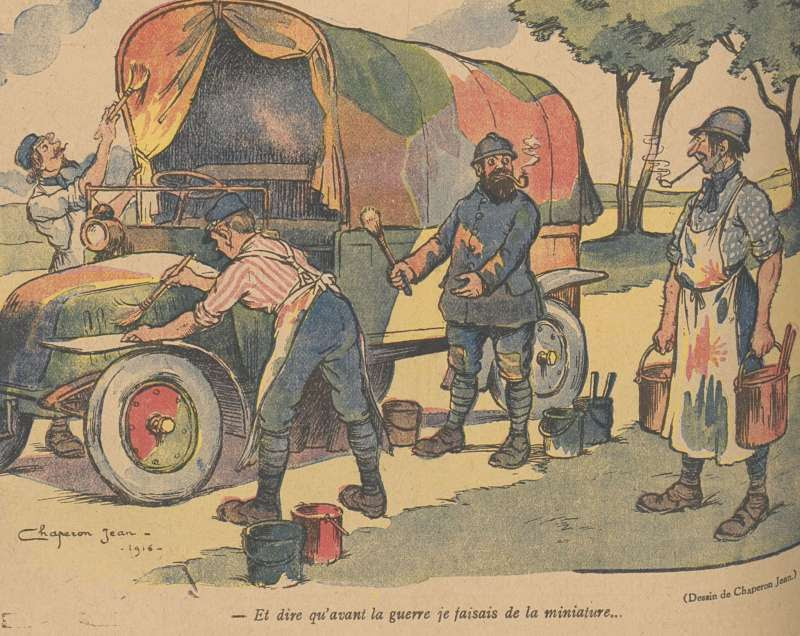 Another artist who contributed to the war effort in World War One was Norman Wilkinson. Wilkinson had been a rather pedestrian maritime artist before the war who had produced fine art as well as posters and illustrations for papers like The Illustrated London News. But active service in the Royal Navy pushed his artistic ideas into altogether more radical territory, and he began to work on ideas for protecting ships from hostile torpedoes. Realising that battleships were too conspicuous to ever be fully hidden on the high seas, he developed “dazzle” camouflage: compositions of abstract stripes based on perspective lines, designed to baffle the enemy’s ability to judge the ship’s speed and position. His experiments were undertaken in four studios at the Royal Academy in London, where he worked with a team of artists including the Vorticist Edward Wadsworth. The concealment strategies of Solomon, Underwood, Wilkinson and Wadsworth would prove crucial inspiration for the deception operations against the Nazis in World War Two. However, the new generation of artists would outmatch their forebears in scale and sheer wizardry.

In 1942, in the dusty furnace of the North African desert, Allied forces were fighting a losing battle against the Axis. On 16 September, two British officers were summoned to a high-level meeting at Borg-el-Arab in Egypt. Geoffrey Barkas and Tony Ayrton were leaders of the Middle East Command Camouflage Directorate, a unit dedicated to deception operations and the concealment of men and military hardware. The Directorate was a very unusual collective: most of the men under Barkas and Ayrton’s command were not hardened soldiers, but ex-artists, stage designers and cartoonists who had been recruited for their skills in visual trickery. One member had been a famous magician in peacetime; Ayrton was a former painter and Barkas was a movie writer, producer and director who had won an Oscar for a documentary film in 1936.

After brief introductions, the men were informed of the top-secret plan for the second Battle of Alamein. They were told that it was an assault which could swing the fate of the war, and which was predicted to be the biggest desert offensive in world history. Then, to Barkas and Ayrton’s astonishment, they were told that they were being handed responsibility for the Allies’ most important strategic manoeuvre. The two men looked at each other: high command had scores of battleships, planes, tanks and artillery at their disposal – what conceivable need could they have for an unassuming gang of artists?

In an ultimate feat of set design, the Camouflage Directorate were given just 28 days to conjure up one fictional army and disguise a real one from view

Previously, the Middle East Command Camouflage Directorate was concerned solely with camouflage tactics. On airfields, the ground had been painted with blacks and greys to simulate shadows cast by gun emplacements to trick Axis reconnaissance planes. The roofs of aircraft hangars were painted with illusionistic perspectives to make it look like civilian housing. Exactly the same techniques, in other words, as Wilkinson and Solomon had pioneered.

But by September 1942, the Allies needed bigger conjuring tricks. They were terrified of the mobility, tactical acumen and firepower of their Axis adversaries, led in North Africa by the legendary Erwin Rommel. In order to win, they needed to catch their German and Italian enemies off guard by making them believe that the attack was coming much later and from a different direction than they expected.

To do this, massed legions of tanks had to be brought into position close to the enemy but hidden from view at the north of the theatre of battle, and a decoy army of 600 completely fake military vehicles had to be created that would make the Axis forces fearful of an equally formidable attack from the south. In an ultimate feat of set design, Barkas, Ayrton and the Camouflage Directorate were given just 28 days to conjure up one fictional army and disguise a real one from view.

The fictional army of the southern area was created with phoney tanks and bogus food stores, ammunition silos and oil containers, all made from boxes and palm fronds covered with tarpaulins. A huge fake water pipe was also constructed, all made to look like the real thing to the German reconnaissance planes making notes of the development from high above. 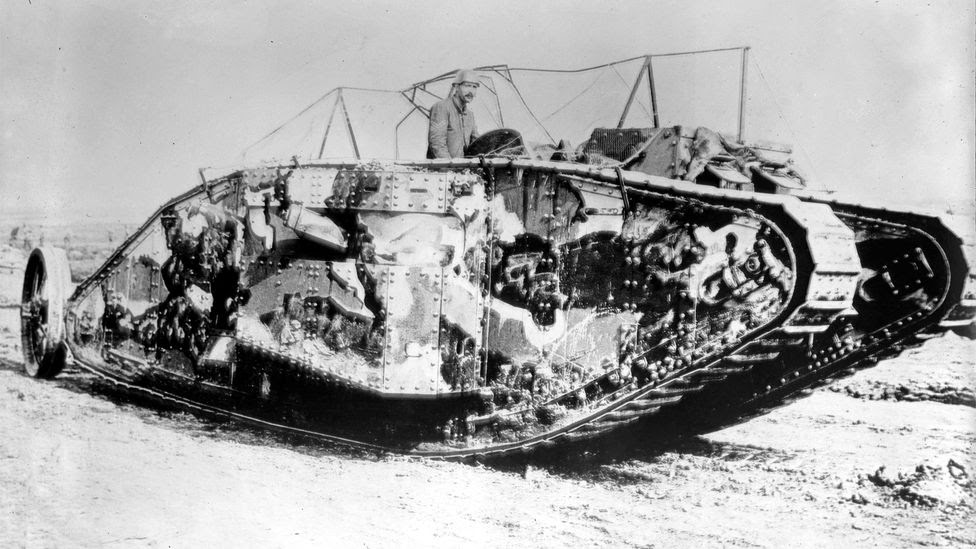 Camouflage developed by artists during World War One (such as on this tank in 1916, with Solomon’s design) influenced deception operations in World War Two (Credit: Alamy)

In the northern section, real tanks had specially fitted wooden compartments nicknamed “sunshields” bolted to their upper half to make them look like regular trucks. Artillery pieces were covered in a similar way. Once in position and immediately before the fight began, the coverings were removed and – so it seemed to the unprepared Axis forces – an entire army had appeared on their doorstep from thin air.

The tricks worked: after a deadly, large-scale engagement the Allies decisively defeated Rommel’s forces. After the battle, one German general admitted that they had been completely deceived by the timing and strategy of the Allied assault. The artists had triumphed.

These ingenious ruses were an inspiration to a US military regiment formed later in World War Two. The 23rd Headquarters Special Troops, better known as the “Ghost Army”, was composed of more than 1,000 men, and used in Europe in the aftermath of D Day. Its objective was to fool the Germans into believing that superior forces of up to 30,000 extra troops were threatening their lines, thus leading them to redeploy troops to locations favourable to the Allies. Like the Middle East Command Camouflage Directorate, the Ghost Army had recruited many architects, designers, advertising creatives and artists alongside regular soldiers and engineers. Famous members of the Ghost Army included photographer Art Kane, fashion designer Bill Blass and the painter Ellsworth Kelly. During its lifespan between 1944 and 1945, it created 22 deception operations to mislead the Germans – and it proved crucial in the Allies’ ultimate triumph over Adolf Hitler.

The Ghost Army used a range of misdirection techniques. False military equipment included hundreds of inflatable tanks that looked from a distance exactly like the real thing, and successfully tricked German aerial reconnaissance. Another team was responsible for bogus radio traffic, intended to be intercepted by Nazi eavesdroppers. A set of mobile speakers pumped out sounds of troop movements and large engineering projects like bridge-building. Members of the Ghost Army also worked as actors, putting on the uniforms of different regiments and mixing in local towns, dropping hints about troop movements in the hope that local spies would pick them up. After the end of the war, the Ghost Army was sworn to secrecy, and the tales of their elaborately orchestrated stagecraft remained officially confidential until 1996.

The stories of World War One camouflage, the Middle East Camouflage Directorate and the US “Ghost Army” reveal a new direction in the story of illusionism in art. Although artists had been used occasionally by the military before the 20th Century (in recording the topography of the enemy’s positions, for example) modern war had involved artists’ visual tricks in a totally original way. Their work in strategic misdirection was critical for the overall war effort, reminding us that deception, as Sun Tzu wisely observed way back in 5th Century BCE China, is always the key element in the “Art of War”.